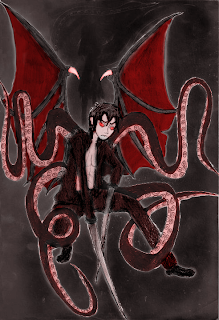 Hey Peeps! It is I De Eval One here once again to show off another finished Illustartion of mine I've done in Coloured! :D

I have to say ever since I've successfully Coloured "The 7 Deadly Sins" I just really want to Colour ALL my images now HAHA! :D

So of course I decided to take a bit of a Liberty with my wonderful Mutant Vampire Character otherwise known as Phillip! :p

As you can see with moi's chosen Colours I'm really trying to bring back the Old School Style of my favorite Legendary Monsters Vampires! Just need to make them awesome again! I really, REALLY HATE what they've become today! D:< Why oh WHY have they been turned into such Wussies I'll never know! :(

So yeah hopefully I can help recreate the awesome Vampire Legends the way they SHOULD be in my future Stories. :)

Well that's it for now until next time...

THE 7 DEADLY SINS IN COLOUR AND MINOR UPDATE

Hey Peeps! It is I once again with more Updates! :D


First of all sorry for not Updating for some time but alas I've been EXTREMELY busy recently and will be for some time so I may not be able to Update as often as I like but I'll try my best. Also my next Film Project will be "Bitter Squirrel" so do expect Updates from time to time about that particular one. :)

In the mean time let me make up for the lack of Updates by Posting the Coloured Versions of "The 7 Deadly Sins"! :D

Obviously I'm not going to introduce them again because you should know about them by now! :p But here's some descriptions of certain Colours I've deceided to give them. :) 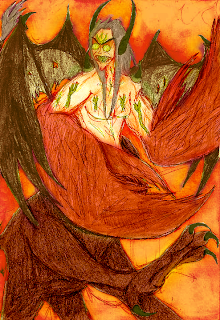 To be honest I think the Colour Schemes to use for Wrath was so obviously pridictable that I could've just done this blind folded! :p

Saying that I do think this Firey Devilish feel for him truely does work! The only thing I think could've been better though is perhaps the Background. Don't get me wrong I love the Fire Effect I've given it but I can't help and just feel it might be a bit too...Orange. :/ Maybe even more orange than Dale Winton O_o (well almost :p)! Maybe the Fire Effect should be less Orange and perhaps more Darker but then that's just me, you guys might disagree. 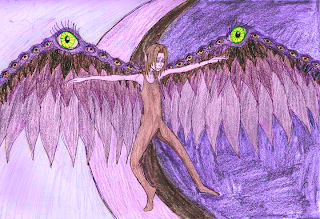 Now Sloth's Colour Scheme is a tricky one because I'm really not sure if this one works at all. :/

To give it somewhat of a Sleepy, tragic feel I felt the best Colours to use are Purple and Blue which as you can see mixed together are the majority Colours here.

I don't know, there's somthing about this that just doesn't seem...Right. :/ I'm considering Re-Colouring him and trying out Brownish type Colours like an Owl or somthing but that's just me you guys might feel differently. 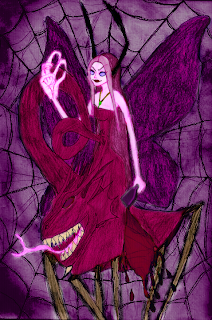 For Lust's Colour Scheme I thought it'd be best to give her somewhat of a Romantic yet Darkly Gothic feel so after extensive research the marjority of the Colours are Purple and Dark Pink.

Personally I think this Scheme turned out brilliantly! However the only parts I don't think quite worked is the Wine Glass (then again it's more the way I Drew it I have a big problem with) and the Necklace which IMO is too bright. 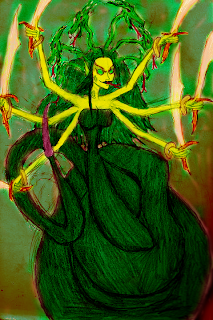 A Greenish yet Firey like Battle Scheme for the Character of Envy just to give her a more threatening look (well...She IS a 6 armed mutant Reptile like Demon you know :p). Personally I think this Colour Scheme works quite well for her but what do you think? I don't know. 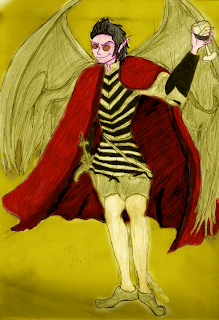 ANYWAY enough perving over my own Creation (how disturbing O_o) back to business! Now for Pride's Character I thought what Colours would suit this particular Dude the best? And then I figured that Gold and Red (mostly Gold though) are the Perfect Colours to represent his pure Vanity and arrogance.

I have to say I really like this Colour Scheme, it works so well IMHO! 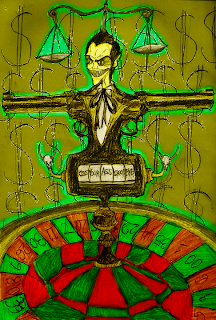 Now Greed I say was the most difficult Sin to Colour.

All sorts of Colours I tried just wouldn't suit him at all and whilst tempting I refused to give him the same Colours as The Joker for if I did then he wouldn't really look like my own Character anymore and I truely do want to make these my own.

After many Tests and Experiments I felt Gold, Green and Red (but mostly Gold) best suited him of all. 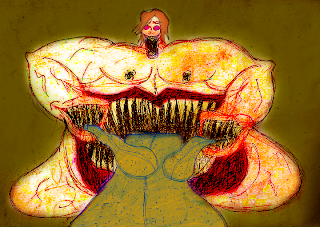 For this disgusting thing I really wanted to give the type of Colours that would just vomitly frastrates you! I also decided to give him blood like brusing to really give the feel of how irritatingly Obese he is!