Hey Peeps! It is I once again bringing you the latest developments on our lovely but bitter Friend Lucius The Squirrel.

Of course as many of you know by now I am indeed currently in full Production so instead of still images I'm going to give you a few Sneak Peaks at a couple of the Animations Tests I've done so far.

The 1st footage above are 2 of the most craziest Scenes in the film which I actually Animated first. As you know it's ALWAYS best to  get the hard scenes out the way, saves all of the hassle and panic attacks for later on. ;) Personally I'm really pleased with how they've turned out! Don't know my own strength. :)

The 2nd footage above are one involving a Lip Synch scene (no sound BTW) and the latter a "creepy crawl". I quite like how the Lip Synch  scene turned out, all it really needs is some In-betweens and it's done! :) But the "creepy crawl" on the other hand I'm not quite sure about. In fact I don't think it even worked to be honest. :/ Either it needs more In-betweens OR I may have to Animate it all over again. Ugh! HATE it when that happens. >:(
The 3rd and final footage involves 2 different hand Scenes and 1 of Lucius laughing. Just like the first footage I also feel the above works pretty well. What's especially interesting is the fact that Lucius laughing and the muscular hand are both only 3 Frames each! O_o Just goes to show you don't need to Animate tons of pictures to get a brilliant movement haha! :D Now the creepy hand obviously had a lot of Frames (I think it's 30 Frames if memory serves me right but I'm not quite sure) but of course Scenes do indeed need more Frames then others and besides...Whenever you see the final result it's just so worth it so it's no biggie at all.
Starting to feel a little more positive about this Project now. :)
Now some of you guys may remember that there was a Dog involved in this Film right? Well I have just given him a massive Re-Design and the bottom images are the results! :) 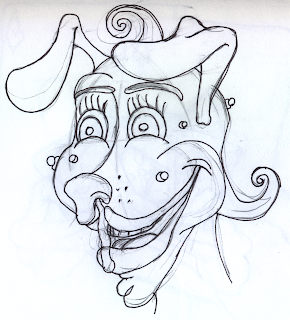 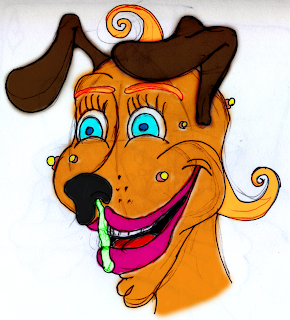 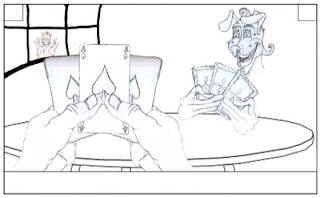 A Dog who you could say is indeed shamelessly in touch with his feminine side :p haha! :D I've even taken the liberty of giving him a name and it shaaaaaaall beeeeeeeeeee....*Drum Roll" BUTCH!!!!! :D
But...What has Butch got to do with this Film you ask? Like I'm going to tell you! :p You're all going to have to wait till the Film is finished. ;)
Now that my latest Blog Update time is done, moi needs to get back to Animating ASAP O_o  so that's all for now folks and until next time...
See ya later Navigators! :D
Noor "Red Eye" Mula
Posted by Noor Red Eye Mula at 08:08