Hey Peeps! Really sorry I've taken too long with updating this Blog within this month but hey ho, thankfully I've made it just before the month was over (better late than never they say eh?)!

Anyways, during my animator's blues, I've found myself working on more concept art for GANTO:Renaissance recently. Why? Because I've found something where I can enter the pre-production works for this project. I'm not going to reveal what it is since it's still early days and I don't really want jinx this great opportunity. But what I will do is show what I've completed so far. 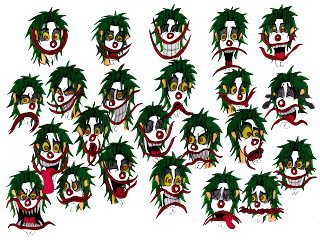 Here are some facial expressions for our good ol' pal Jonathan! I did do another facial expressions sheet for him two years ago but to be completely honest, I looked at it again and it wasn't really that good which is why I've re-done this. Truth be told I think he looks like he's got more personality now.

The above image is Jonathan's bodily expressions sheet. Unlike the facial sheet which is new, the above sketches are the old sketches from two years ago, the only change I've done here is colour them since they were Black &White previously. Although Jonathan's design has been slightly tweaked now, I felt the bodily expressions sheet is still a relevant reference to use hence, didn't really feel it needed to be re-done. Saying that I still may make a new one anyway to add some more movement for him.

As well as the GANTO:Renaissance concept art, I've also written two poems in my spare time. Why you ask? Well, although I'm not really a poet to be honest, I do however, want to improve my writing skills for my future narration work, scripting etc., hence I felt poetry would be a good exercise for me to start. 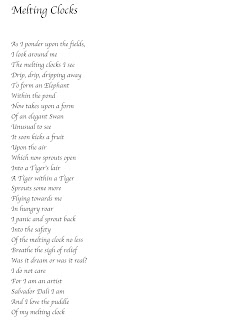 The first above poem I've written is "Melting Clocks". This poem is pretty much just a tribute to one of my favourite artists of all time, Mr. Salvador Dali!
"Friendship, Snobbery & Betrayal" is the second poem above. This poem is inspired after going through a little "dark' place last year during my loneliness and hurt.

Again, since I'm not really a poet, I'm not sure if these poems work or not. Any room for improvements would be very much appreciated thanks.

See ya later Navigators! :D And once again really sorry for the delay.