Macbeth Of The Galaxy!: In Colour

Greetings Peeplings, it is I once again bringing you the latest from within moi's far distant mind!

Remember my earlier work Macbeth Of The Galaxy anyone? Well, for this month's update I decided to re-visit this old idea and colour characters... 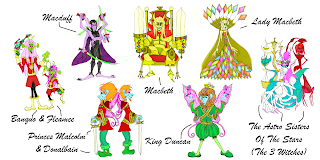 Whaaaaa no GANTO animation tests this month?! Relax folks I am not faffing, there is indeed a VERY good explanation for this. This month's update was originally going to be showcasing some more GANTO animation tests, in fact I was (and still am) so proud of what I've achieved so far with my tests I couldn't contain my excitement showing you all. So what happened you say? Well, it pains me to say my scanner is down at the mo. Yes, my scanner is down and I have absolutely no idea when it will be up and running again. I even tried using the local Library's scanner because I was so determined to showcase my animation tests...A lot of fat use that was (in other words the Library's scanners are utterly useless). The closest I could show for GANTO right now is this... 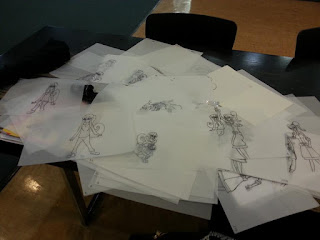 The various animated papers of the tests themselves, I know it isn't much but hey it's better than nothing. Believe me when I say I'm doing everything in my power to sort my scanning problem ASAP, when it will be sorted I cannot say but I can guarantee once it's up and running again, I'll make damn sure to show you wonderful folks the tests. For now back to the main subject this month's update... 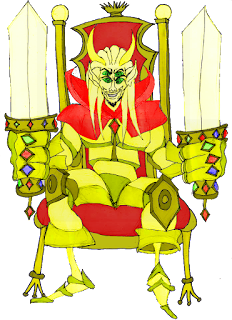 First up is the main protagonist (but who is actually the real villain of the story) himself Macbeth looking very smug with his egotistical self and sitting majestically on his golden throne. The really highlight the arrogance and prideful power of Macbeth I decided to go with a golden and red colour theme. As they say, pride is a terrible sin. 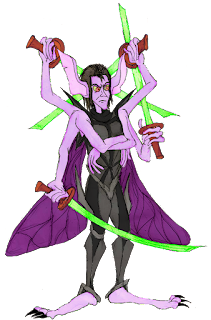 Next up is the main antagonist (but who is actually the real hero of the story) Macduff. The ever noble fly-winged, six armed Macduff is the greatest swordsmen of the entire galaxy and a real force to be reckoned with! Although Macduff is a very loyal character towards King Duncan and his sons, I always felt Macduff worked as a little bit of a lone wolf too hence why I decided to go with the black and purple colour theme for his character. 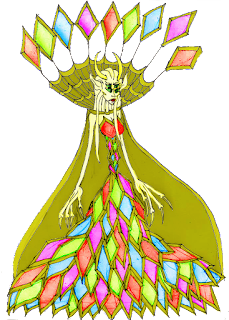 Next up is the ever infamous wife of Macbeth, Lady Macbeth (who never had her own name for some really odd reason). Alien wise I just made her the same four-eyed specie like her husband hence the similar golden colour theme like Macbeth but not quite as much as Macbeth's at the same time. Decided to mainly give her a multi-coloured jewels theme from within her dress to highlight the new found vanity and power which came though her and Macbeth's despicable actions. 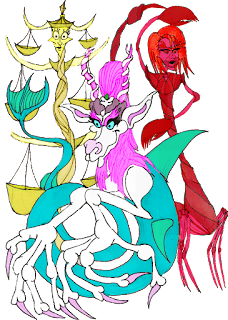 Next the Astro Sisters of the stars A.K.A. the three Witches. Since the Witches kept predicting Macbeth's future in the story I just thought "Why not make them into creatures based from the Astrology myths?" I also took the liberty of using similar colour themes based on each of their Astrology they're representing. 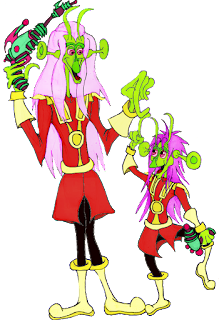 Up next is Macbeth's best friend Banquo and his young son Fleance. As well as giving them the underdog type look since *Spoiler Alert: Fleance is destined to become the future King*, I decided to give them a Royal army colour theme to highlight Banquo's loyalty in his part as part of the Royal army. The reason why Fleance is dressed in a similar fashion is because I have no doubt in my mind he loves his father so much he does what other little boys to and try to imitate their own dads. 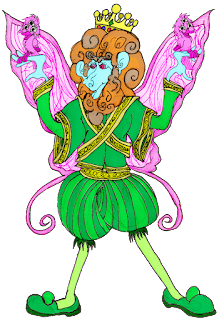 Now is the turn of the noble King Duncan. Because the character of Duncan has always been described as the good King who always looked after the people of his Kingdom really well, I felt it was only right to give him a kindly look (included with butterfly-wings for good measure). For Duncan I went for a pink and green colour theme for him. Originally I was just going to go with a pure pink look but as I experimented a bit I discovered that green actually suited him well hence took full advantage of this discovery. 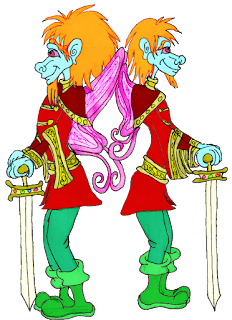 And of course last but most definitely not least Princes Malcolm and Donalbain, the sons of King Duncan. Not much different lookwise from their father really but if you're wondering who's who Malcolm, the eldest son, is the one who has longer hair and lager butter-fly wings whereas Donalbain, the youngest son, is the one with shorter hair and smaller butter-fly wings. With Malcolm and Donalbain I decided to mix it up a bit. I went with a similar colour theme like their father but also added a bit of Banquo and Fleance's colour themes to highlight them being a part of the Royal army but of much more importance since they are Princes after all.

And that is all for this month's update. I'd like to apologise again for not being able to showcase the GANTO animation tests this month. However, not being one to miss at least once a monthly update I hope you still enjoyed what I had to offer.