Heeeeeeeey Peeps! It is I once again bringing you the latest of what I'm currently up to. :)

As you all should know by now I've currently got an idea for a comic but I'm still trying to develop the story. Don't get me wrong it's there in my mind but I'm still trying to polish it like the perfectionist I am. Plus I'd really like to discuss the story with someone to make sure I'm on the right path, so if any one of my former Classmates would like to give me a little helping hand do let me know ASAP please? Thanks. In the mean time whilst I'm still doing that, I've decided to practice making a comic for a bit since I've never really done something like this before (the ones I've done when I was a baby don't count).

Who remember's an old french Nursery Rhyme Alouette? Well curiosity got the better of me the other day and being the nosy geek that I am, I decided to look it up and to my horror discovered that this song is most certainly NOT as sweet, innocent and cheerful as everyone has tended to sing it! For those who don't know, if you translate this song into english, you'll find that it's actually about a bird being plucked to death eeeeeeeek! O_o But saying that I wasn't really that surprised to be honest since the vast majority of Nursery Rhymes are actually quite well known to not be as innocent as they seem anyway despite being aimed at kids. So this gave me an idea to poke a little fun at this subject and thus decided to use this as the perfect excuse to make a mini/practice comic and here is moi's result! :) 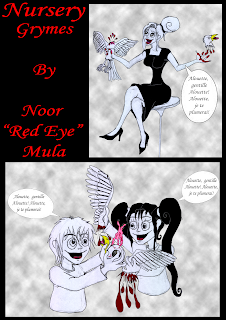 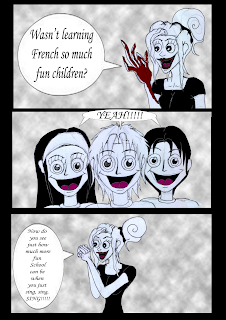 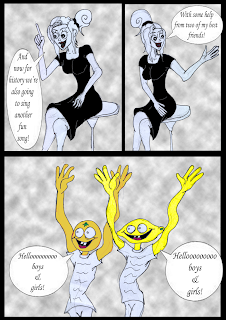 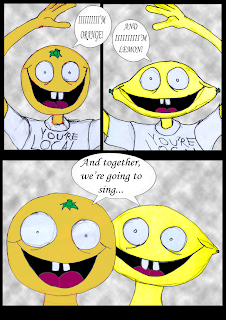 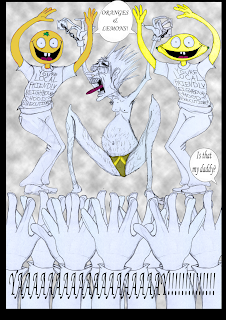 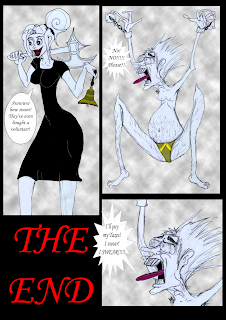 So how's that for my first time? Constructive criticisms welcomed. :) And now for a couple of updates...
As already mentioned I’m still trying to polish the story for my comic but apart from that I need to start doing turn-arounds for Leora and the gang since their designs are already here. Same with GANTO: Renaissance, the designs for Cleo, Jonathan and the gang will remain the same I just need to re-do their turn-arounds to help me develop them into puppets. And while we're on the subject I've written the Treatment Pitch for it which is currently being looked over by the brilliant Perrie Murphy. However, since he's a very, VERY busy man at the mo it may take some time for him to get back to me. So again while I'm waiting for him, if any of my former Classmates are reading this and would like to look over it for me let me know ASAP please? Thanks.
In terms of animation work I am seriously considering entering one of the 11 Seconds Competition since I'd really like to get better at animating. I'll either enter it next month or the month after depending on my very unpredictable schedule really, so watch this space.

And last but most definitely not least; before I bring this latest update to a close here is a really small sneak peak of how Salvador's House Party is looking like so far... 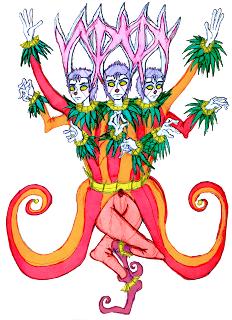