Why helloooooooo there Peeps! It is moi once again bringing you the latest on GANTO:Renaissance!

To be honest this isn't really going to be a long update compared to my previous entries but hey Blog updates don't always have to be long. Anyways to begin I'm re-doing the Turn-Arounds for the GANTO characters starting with Jonathan first (since he'll be featured in my "planned" Teaser Trailer). 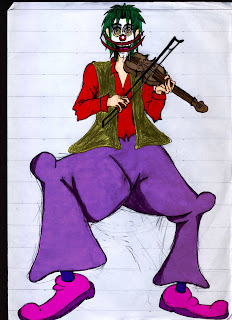 Haven't finished yet, I've only done front view so far but hey at least it's a start. :) Also as you folks may remember from my previous update I hinted at creating David Bowie? Well folks... 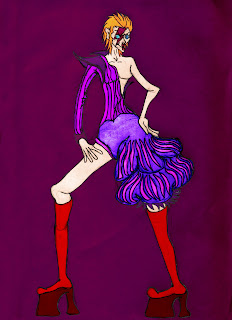 VIOLA! Here's Mr. Bowie himself! :D I've taken aspects from some of his well known eccentric styles (yes, waaaaaaaaaay before you Lady Gaga) , exaggerated them and have made them my own. :) Just to be clear Bowie will not be involved in the actual GANTO film. However, he will be featured in my planned Teaser Trailer.
I also still need to ask my former Uni Classmates to help me out with this film if I am to succeed with this film (no matter what the cost, I WILL see this through dammit). I came really close to writing them the email but I'm ashamed to say I sort of chickened out. I'm trying to find the way to ask them without annoying any of them, how will I do it I don't know but I'll figure it out one way or another. Besides, the animation world is well known for being incredibly TINY, therefore I can't exactly keep running away from them forever anyway. I'll be sure to keep you guys posted. :)
And if any of you are wondering about the BAA Stings Comp don't worry I'm still working on it. I'll be honest it's getting increasingly unlikely I'll finish it on time for the Comp but it's OK, at least now I'll have a bit more freedom with Al Pasheepo and make him even MORE epic! ;) Again I'll keep you guys posted on BAA. :)
And before I bring this latest update close I saw this Posted earlier by my good pal Natan Rifkin and I have to say I like this, I like this a lot. Very harsh but indeed true. 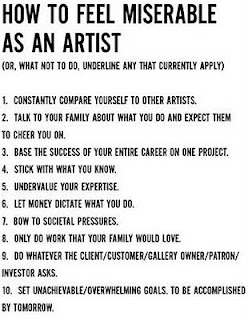 (Source Link)
I think I'll start crossing out the very things I DON'T want to end up as as advised. ;)
Well, that's all for now folks and until next time...
See ya later Navigators! :D
Noor "Red Eye" Mula
Posted by Noor Red Eye Mula at 19:07