Hello Peep Peeps! It is I once again bringing you the latest news from the artistic vortex of my mind. But first some serious business to discuss.

After years of resistance, I have finally swallowed my pride and joined Twitter. So if you like what I do and would like to show some extra support for moi then please, feel free to follow. But just so you all know, the only Topics/Status' I'll be posting there will be serious stuff like self promoting films/art etc. so don't expect me to post anything silly.

Next up, remember from my previous update I asked you all who you thought the two characters at the bottom of the page were? Did you guess right? As promised, I can now reveal those two characters were Gobo and Red from one of my favourite childhood television shows Fraggle Rock. Why did I draw them like that you ask? Well, it's for the Fraggle Rock Competition which I've just entered (I've also added in Wembley, Mokey and Boomer). Voting opens in August so watch this space.

Now you're all probably wondering what's happening with Al Pasheepo & Gang? Well, due to unforeseen circumstances, I'm sorry to say I had to make the difficult decision to halt production for the time being but fear not folks, it won't be for long and production will be resumed in August.

Speaking of which, heres where my headline "Something (Secretly) New" comes in. I'm working on a "Secret" project relating to films and clips from well known British Films. So without revealing too much, here's some Concept Art I've completed... 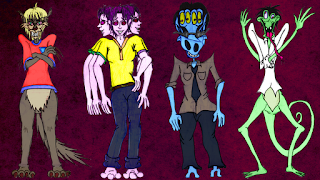 These four Monsters above are modeled and based on four well known characters from a popular television show. Like I did with Gobo and Red from Fraggle Rock, I'm going to let you all guess who these four are. All will be revealed in...Not the next Blog update but in AUGUST! So you all have a looooooong wait (hehe, I lurve being eval)! 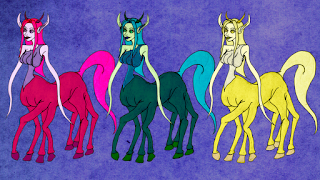 And finally, before I bring this latest update to a close, here's some female characters I've created relating to my "Secret" project. 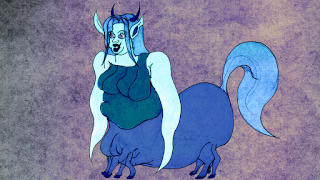