Just One Piece of inspiration! (And did I mention I love wings?)

Hey Peeps! It is I once again bringing you more...Fan-Art.

OK, I know I'm showing a bit too many Fan-Arts than my original work lately which I can only apologise for. However, my Laptop is still down unfortunately and since I can't really finish any of my original work (particularly animation wise) without it; I've decided for the time being to continue showcasing some of my old art work I've never posted here before. Thus, continuing my motto of updating this Blog at least once a month. Of course, most of my old art work I want to show which I'm still proud of just happen to be Fan-Arts. Anyways enough of me yapping away, onto my Fan-Arts now! 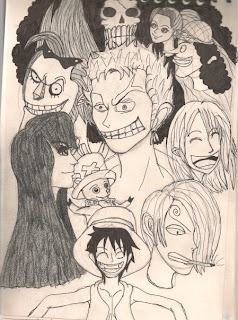 The series of Fan-Arts I'm showing you all now is from my all time favourite TV series One Piece! Seriously I LOVE this show to bits! It's weird, it's crazy, it's serious, it's funny, it's tragically sad, it's over the top, it's surreal, it's exciting, it's unpredictable and above all it's so original and wonderful, I only wish I had thought of this show myself. It's that good in my honest opinion. The story-arcs are amazing, the characters are amazing, the villains are amazing, it has everything I could ever ask for in TV series! And I sound like a giant One Piece poster girl advert, back to the art work themselves. Above is an illustration are the faces of the main characters of the show, otherwise known as The Straw Hat crew. After drawing this I wondered how awesome would it be if they had wings since, you know, I have a great satisfaction with wings and would find any old excuse to draw them into my work? Well, let's find out! 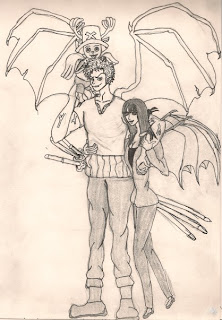 Above is an illustration of my favourite Straw Hat (and overall favourite character in One Piece in general) Roronoa Zoro standing with Nico Robin and carrying little Tony Tony Chopper! Since Zoro is such a badass I gave him dragon wings. Robin has bat wings because she's a little, tiny bit gothie and Chopper has little birdie wings. I actually used to be a Zoro and Robin shipper when I drew this years ago but now I ship Zoro with Perona and Robin with Franky! Funny how that turned out huh? Oh and before anyone says anything yes I know Robin is actually 6 foot 2 but I have a confession to make...I didn't know that at the time and I feel a little bit silly drawing her shorter than she is now (hey, even Fans make mistakes, SUE ME). But despite that little hiccup, I'm still glad how the above illustration turned out. 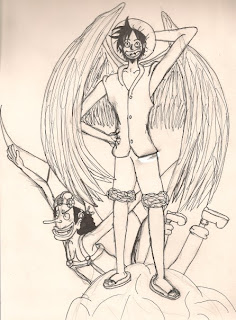 Moving on, above is an illustration of two of the coolest best friends ever, Monkey D Luffy and Usopp (I swear these two should have their very own sitcom)! Because Luffy is the main character of show, I decided to give him big, angelic like eagle wings (can't get much more majestic than that). Wasn't sure what sort of wings to give Usopp but decide on the pterodactyl wings in the end and funnily enough it worked! Suits him. Speaking of Usopp, I made a shocking discovery that he's the most hardest one to draw! Honest to God I thought he was going to be easy! 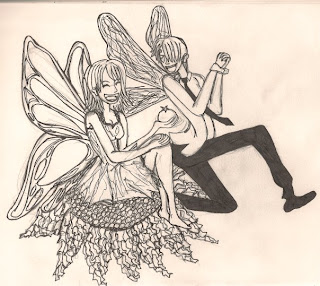 Next up is an illustration of two characters I still ship to this day and haven't changed my mind on is Nami and Sanji! Because Nami is a little bit of a girly girl I felt it was only right to give her butterfly wings. Don't be fooled by her appearance though, she's actually a lot more tougher (and might I add scarier) than she looks! I gave Sanji fly wings because...Well...If he's to be with butterfly Nami than he might as well have wings from the insect species too. Yes, that is my honest reason. 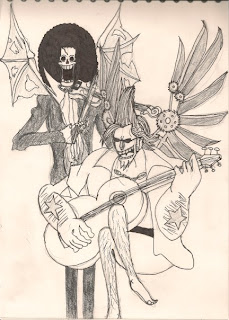 And now finally but most definitely not least are Franky (the only Cyborg to ever wear speedos) and the eccentric, undead skeleton Brook! For the latter I don't think I even need to explain wear I gave him boney, decomposing wings. Same for Franky, he has metallic wings, do I even need to explain why? And just to add I made another shocking discovery, Franky is actually the most easiest one to draw! Seriously I thought he was going to be the hardest, how does that even work?!

Just before I bring this latest update to a close. What I love about One Piece and why it's my favourite show of all time is just how it mixes up so much genres together and somehow it just works! When it's funny it's hilariousness, when it's sad it's tragically sad. Hell this show doesn't even take itself seriously and yet, whenever something serious in the story does happen, it's just so well written and done in way when it doesn't get too pretentious. It just knows how to balance everything out so well. Even though I personally love it, I'll be the first to admit this show isn't for everyone but if, like me, you enjoy everything I mentioned about One Piece in this Blog than this show is definitely for you. So please if you can do check it out some time. Wow what do you know? I really am a walking, talking advert! I'll hush now.