Do NOT mess with the Witch and her precious Crow!

Hi again Peeps! It is I once again introducing to you all a new illustration for the world to see!

This month I entered another competition where we had to create our own adaption of "The Crow" made by the London based artist Gary Russell. When designing my own Crow adaption I was originally going to do some tall, dark, handsome man in Crow like clothing and Crow like posing as well as being surrounded by many, many wonderful Crows...Until I realised: "Actually that very image has been done to death by other artists already, let me try something different." So I went right back to the drawing board (pun unintended) and took another, closer look at Gary Russell's "The Crow". The more looked at it, the more I started to think: "This is no Crow, this is a guy turning into a Crow!" Then that very idea clicked into my mind... 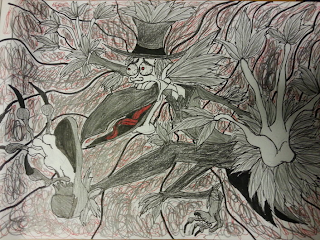 And voila here is the result! The above illustration of a guy literally transforming into a Crow! Not very pleasant looking is it? Nor is it meant to be to be honest. I've even taken the liberty of attaching my very own short story for it: One day an uptight Toff was walking through Camden High Street when he saw a Witch performing in front of many happy, smiling faces along with her pet and best friend a Crow. Believing he's superior to the whole world around him and especially the Witch, the Toff thought it would be "hilarious" to kill a Witch's Crow so without delay he took out his self entitled gun and shot the poor, harmless Crow in front of everyone and the poor crying children. Devastated the Witch vowed revenge on the Toff by...Well, draw your own conclusion from the above image. Oh yeah and whole crowed cheered the Witch and began stomping and spitting at the Toff/Crow, which continued on for years and years until the day he died, the end!

Well, this is pretty much it for my latest update I guess. Speaking of Crows here's a very short animated film I made a few years back featuring one called "Loneliness Of Death" (if you haven't seen it already).

Loneliness Of Death from Noor Mula on Vimeo.