Paintings of old and storyboards of an old project.

Hey Peeps! It is I once again bringing you a new update, this time showcasing some of my old paintings and a couple of storyboards of an old project which due to my college and university studies, I never got round to making in the end. More on that later, first up the paintings. 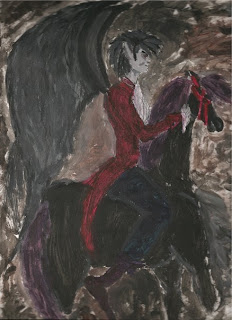 Those who know me will now how much I am fascinated by the Vampire legends (not the Twilight sparkly ones, yuck) so here is an old painting I created of a Vampire riding on his Vampire Horse, calmly hunting for his unsuspecting victims.  What I find so interesting about Vampires is how classy, polite and sophisticated they are, especially the way they start to approach their victims, gaining their trust before eating them, which makes them so much more scarier! With other monsters of legends at least we know where we stand with them, not only do they look evil they act evil whereas Vampires come to you as friends, great hosts and in most cases take on a form looking like anyone else. You don't know the person you befriended is a Vampire until it's too late!

The next series of paintings you are about to see actually relate to storyboards I was talking about earlier. Six years ago when I was studying Art & Design in college (one year before studying Animation in Uni), I was creating stories in my spare time for my future animation projects. One such story which you are about to see is about a Winged Cat with a split personality. What's interesting about this one is that this was the furthest I went to creating a storyboard for it. Unfortunately due to my college and uni studies I never got round to making it in the end. However, I am considering reviving this project in future once I am done with the secret project and Al Pasheepo project. And here is the Winged Cat himself Alfie Angel. Alfie is the most incredibly kindest creature you could ever hope to meet, always helping those less fortunate than himself and would never even hurt a germ. Unfortunately because Alfie is too kind, he his unable to stand up for himself against scumbags and thugs. 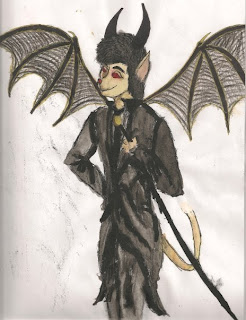 That is until his alter-ego Ethan Evil awakens. Unlike Alfie, Ethan takes no crap from anyone and he always awakens whenever Alfie is in danger. But this comes with a price because Ethan is not a very nice guy at all, in fact Ethan is just plain psycho! And whenever he fights back against the scumbags and thugs...Well, let's just say the results aren't pretty, gruesome even. 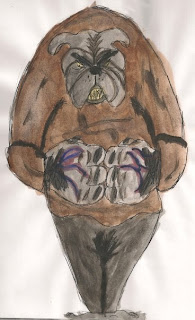 Speaking of scumbags and thugs here's one now, a despicable Dog with a not so scary name of Joshie Woshie! Is just me are Dogs always the villains in my works of fiction? No reason, just something I've noticed recently.

Now finally we've reached the rough storyboards. If I am to revive this project I am thinking of tweaking this story since the story seems a little to simplistic at the moment. We'll see.

And before I bring this latest update to a close I am pleased to announce that Bitter Critter has been entered into a new competition! Of course this means I need your help with votes, if you could all do me a favour and vote for Bitter Critter I'll really appreciate it, thank you all in advance.