Hello Peeps it is I once again bringing you another once a month dosage of moi's Bloggy update!

Before I begin let me just start with some GANTO related news first. As you may remember from last month's update I won "The Tommy Fund" hence I will be able to begin animating GANTO as soon as possible. Currently I am trying to finalise the pre-production/concept-art quickly, in fact for this month's update I was originally going to be posting these very concept arts. However it's taken me longer than I thought and since I don't like posting unfinished work, this is the reason why I'm posting about something else for now. Don't worry folks as soon as I've finished drawing them I'll be sure to post them here.

Now that that's out the way onto what this update is really about. When I first applied to "The Tommy Fund" I also entered another IdeasTap competition at the same time called "Shakespeare In Shoreditch - Film" where we had to create our own interpretation of one of Shakespeare's famous plays. Although I didn't win this competition I'm kind of relieved to be  honest. Not because I wanted to lose (if I did I wouldn't have entered it) but because once I had already won "The Tommy Fund" I started to panic about winning this because if I did, I would have been animating two films at the exact same time hence, double the work load and double the stress (not fun folks, believe me)! As well as writing a new adaption we also had to submit some concept art so without further ado, here's what I've created so far and submitted so far. 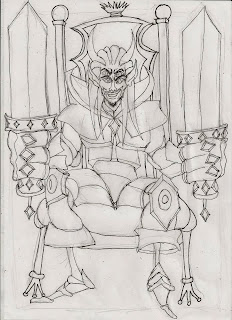 First up is the main protagonist (but who is actually the real villain of the story) himself Macbeth looking very smug with his egotistical self and sitting majestically on his...Errrrm..."Iron Throne"! (Yes, yes I've must made a Game Of Thrones reference, sue me!) And as you should guess by the title of this update by now my story adaption of Macbeth is set in outer space and hence why I've created him as a four-eyed alien. Of course the Macbeth alien isn't the only character I submitted, here are the rest of the other Macbeth characters we all know and love... 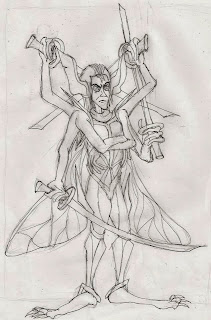 Next up is the main antagonist (but who is actually the real hero of the story) Macduff. The ever noble fly-winged, six armed Macduff is the greatest swordsmen of the entire galaxy and a real force to be reckoned with! Surely the smug, arrogant, cruel Macbeth would never do anything to piss him off right? Right?! RIGHT?! RI...Oh you all know the answer to this question! Next up is the ever infamous wife of Macbeth, Lady Macbeth (who never had her own name for some really odd reason). Alien wise I just made her the same four-eyed specie like her husband. What I've always found really fascinating about Lady Macbeth is just how divided everyone's opinion is of her within the Shakespeare Fanbase. People either really despise her and think she's the most evil, despicable character of the entire story, or they feel really sorry for her and believe she's the most mis-understood victim of the entire story. Me personally? I honestly think BOTH of these opinions are wrong! Misunderstood victim? Give me a break she's far from innocent in this story, she knew exactly what she was doing and didn't care about the consequences (until it started to affect her) but the most evil character? Nope, sorry, that crown goes to Macbeth (pun unintended, honest.) 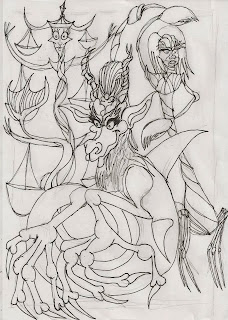 Next the Astro Sisters of the stars A.K.A. the three Witches. Since the Witches kept predicting Macbeth's future in the story I just thought "Why not make them into creatures based from the Astrology myths?" And so I did, could you tell which Astro star is who? 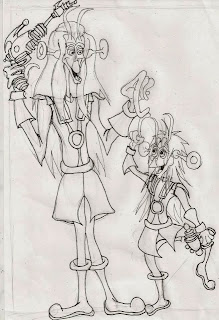 Up next is Macbeth's best friend Banquo and his young son Fleance. As soon as I went round illustrating the father and son duo I noticed something quite odd, for an adaption based within outer space I suddenly realised none of the characters I drew so far even had lazer-guns! So with this in mind I decided that the image of Banquo and Fleance would be the perfect time to include the lazer-guns. 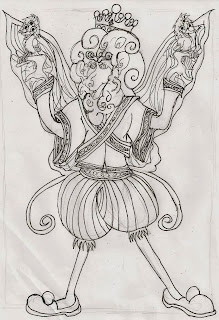 Now is the turn of the noble King Duncan. Because the character of Duncan has always been described as the good King who always looked after the people of his Kingdom really well, I felt it was only right to give him a kindly look (included with butterfly-wings for good measure). As well as looking kind I still wanted him to look like he really came from royalty, hence which is why I've given him humanoid-lion type features. 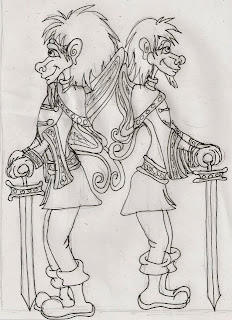 And of course last but most definitely not least Princes Malcolm and Donalbain, the sons of King Duncan. Not much different lookwise from their father really but if you're wondering who's who Malcolm, the eldest son, is the one who has longer hair and lager butter-fly wings whereas Donalbain, the youngest son, is the one with shorter hair and smaller butter-fly wings.

So you guys are probably wondering "Why did you choose to do an adaption of Macbeth?" Well, as someone who loves the Shakespeare stories Macbeth has always been my personal favourite! Just the dynamic of how once a good man turns bad once he starts to get corrupted with power and arrogance! I especially love the role-reversal of how Macbeth the villain is in the role of the protagonist whereas the hero Macduff is in the role of the antagonist. Quite similar to todays role-reversal stories like Death Note's Light Yagami & L and Breaking Bad's Walter White & Hank Schrader. In a way Shakespeare's Macbeth was quite original and way ahead of it's time in this respect. It's a shame more stories aren't like this but in a way it's probably better it stays rare, otherwise this storytelling style will just get boring and old after a while.