Jonathan & Cleo: "Merry Christmas one and all and a Happy New Year!"

Season's greetings Peeps! It is I once again bringing you 2013's last Bloggy update (until Jan 2014).

Ever since Christmas 2010 I've been attempting to create another Christmas Card just as epic as 2010's but never seeming to regnite that same spark. Then the Red Eye side to myself came to the conclusion "Don't stress yourself out girl, there's a chance you might not even make something just as epic again and so what? Just create what's right in your heart." So I decided to create something which has truly made me happy this year so I created this. 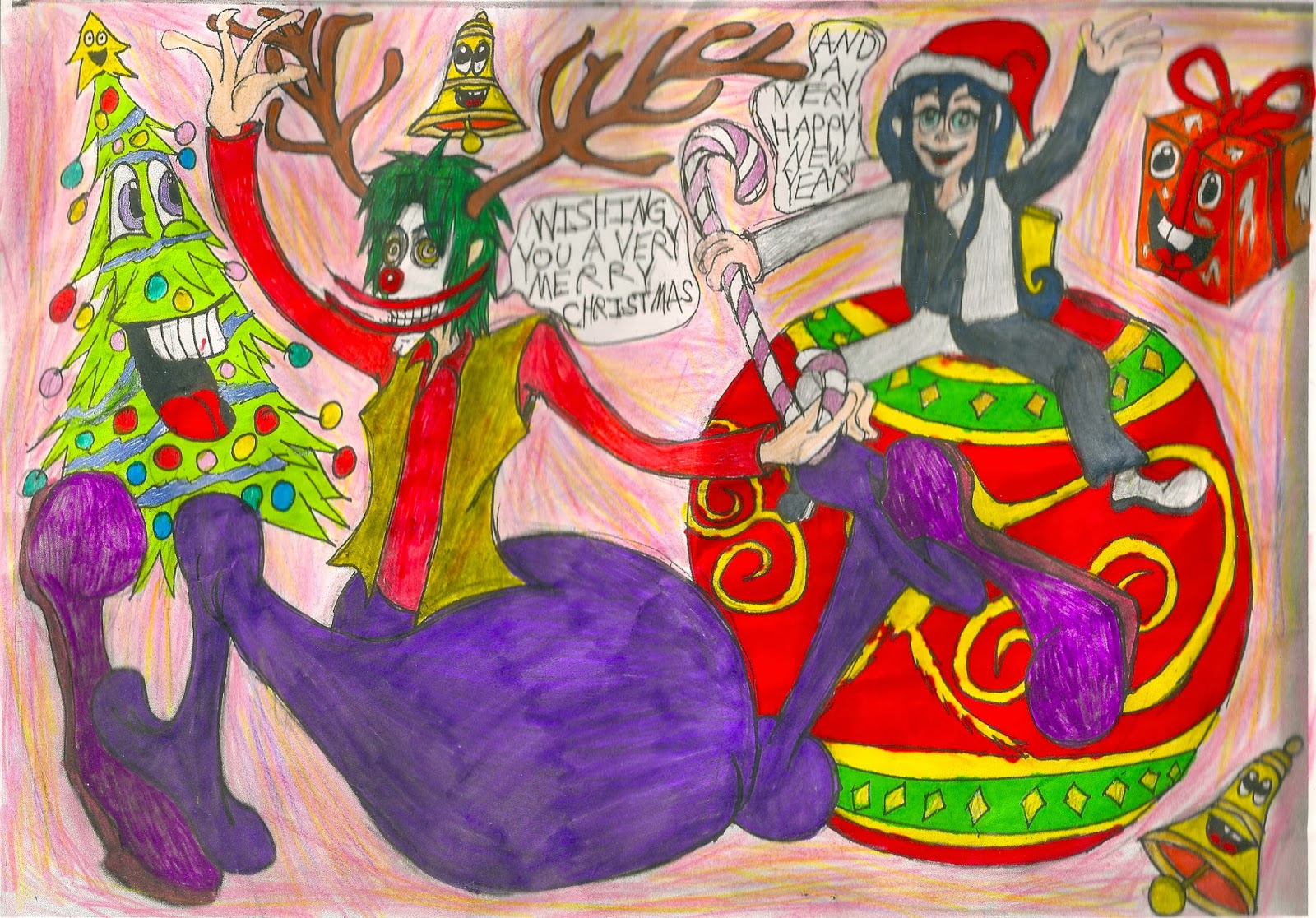 Yes it's a Christmas Card of Jonathan and Cleo from GANTO within their own wacky, imagination world wishing every single one of you lot a Merry Christmas and a Happy New Year. I was originally going to post this in Black & White (since I'm still having trouble re-installing Photoshop unfortunately) until I thought to myself "Oh come on it's Christmas! Make it colourful anyway and if that means using felt-tips so be it!" And so I did.

So what is it about this very image which supposedly makes me happy? Well I'm going to be blunt, I have not had a great year. My Lap-Top broke down making me lose all the Adobe Programs I had limiting my creativity (thankfully Lap-Top's been fixed now but am still having trouble re-installing the programs), constantly applying for jobs but constantly being rejected (which hurts to be honest), had a lot of personal crap thrown my way (which I'm not going to get into) and overall have just been really depressed. I'll even go as far so to say it's nearly as bad as my 2011 year (that was awful). That is until October of this year when I won The Tommy Fund that things started to give me hope. I know it sounds strange but it was like someone still saw something within me to give to the art/animation world and is willing to give me a chance. My motto has always been if your work has managed to make even one person happy then you've done something right. Now I look at GANTO and think "It's not over, you can still do it. Believe in yourself!" And come January it's all I'll be working on, I don't care if I am only a one woman animation team I am making GANTO and there is nothing anyone can do that will stop me!

What's also given me hope is I've managed to bag a few job interviews in the second half of the year too and whilst I still haven't gotten anything, at least I'm getting there slowly but surely.

And before I bring to this latest update to a close I just want to say a special thank you to those of you who still come to visit this Blog of mine. I don't know who any of you are or where any of you are from and even what you guys are thinking! Hell I don't even know if you guys even read my Blogs or just come to look at the pictures but either way it's because of you wonderful folk that I manage to keep this Blog going and thus encouraging me to keep pursuing my dreams and not give up, no matter how bad things become. So truly from the bottom of my heart thank you so much beautiful people and yes I mean every single word I've just said.

Well that's all for this year folks and until next year (well next month actually)...

HAVE A VERY MERRY CHRISTMAS NAVIGATORS AND SEE YOU ALL IN 2014! :D