Hey Peeps! It is I once bringing you the latest developments of my creative life. :)


Remember "GANTO" anyone? Now many of you who know me will what I'm talking about for those who don't "GANTO" was the name of a short Film Project, that was very dear to me, I tried to make last year which unfortunately did not turn out how I wanted. :( However! Knowing full well popular story was to my Peers and just how much potential it had I've decided to re-visit this old project of mine and revive it! :D Although the current working Title will still be called "GANTO", I've decided to rename the project "GANTO Renaissance"...The sign for the Film's rebirth. I've also taken the liberty of beginning the Concept Art already as you can see below. 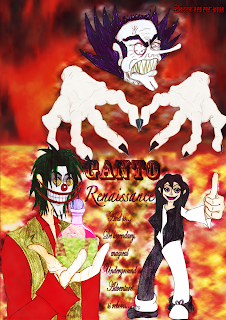 A rough Poster of the Film containing the 3 main characters we all know and love.

Well...Except Pubert of course, no one likes him haha! :D

(For the record he's not supposed to be liked BTW.)

I've also re-designed the Magical GANTO Drink of course. May have to re-design it again though since currently it looks too "Perfume" like. :) 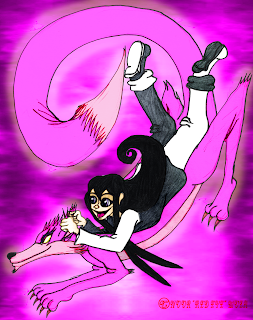 Awwwwwwww! Cute, sweet little Cleo riding on the back of a "Magical" stuffed Fox. (For those who don't know, Cleo's the main Protagonist of the Film.) 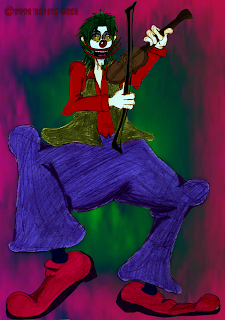 And here's everyone's favourite Mentor Jonathan The Clown leaving the Magical "GANTO" Cave of wonders haha! :D Surely nothing bad will ever happen to him right? RIGHT?! O_o 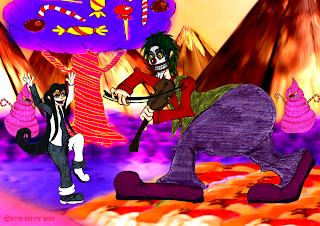 Jonathan and Cleo! The World's two best buddies dancing together in errrrrm? Candyland? Wait! Isn't this Film supposed to be set in the London Underground? :/ Well what can I say? That's ze amazing power of GANTO for ya! ;) 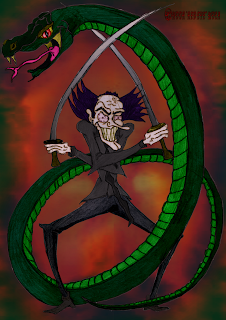 Now this Revival Project can never be truly complete without it's most infamous, Lost Property obsessed Villain Pubert of course! ;) Pubert I'd say is the only one I've given a slight re-design to. As you can see I've given him a much more darker, menacing look and have slightly changed his body structure. I also took the liberty of adding a gigantic, demonic Snake just for "dramatic effect." Saying that I am considering giving him a Pet Snake now! O_o Don't think I'll make it too dominate though. 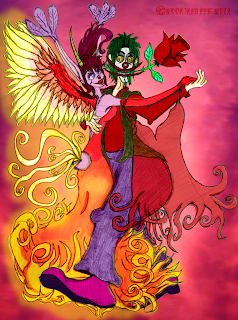 Awwwwwww cute! Who knew Jonathan's such an old romantic eh? ;) But truth be told the only reason why I drew this image is because Jonathan at the time was the only one not to have Concept Art involving an animal. Personally it just didn't seem right hence here cometh him romantically dancing with a beautiful Phunnix. :) This may shock those who know me but oddly enough this is actually my favorite "GANTO" Concept Art so far! O_o Yup! Moi's starting to get soft alright. 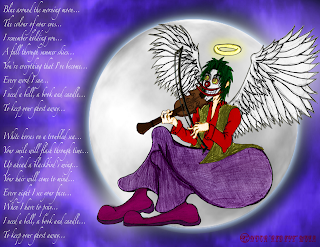 Jonathan in Angelic form playing to a beautifully lit moon in the sky accompanied by the Lyrics from "Bell, Book & Candle" sung by Eddi Reader. A beautiful song about death which is really sad yet comforting at the same time. I recommend it, it's really nice. :) Wow that was a little bit morbid. O_o


The next following images you are about to see are pretty much the same but only in Black & White instead of Coloured. 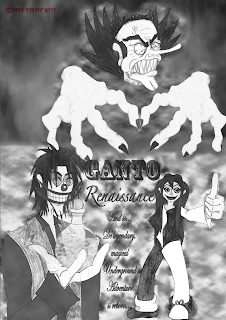 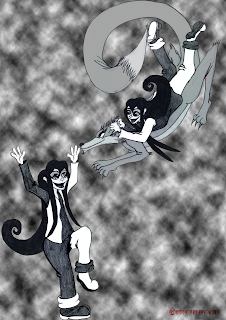 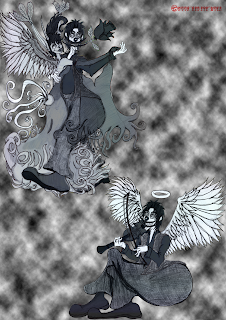 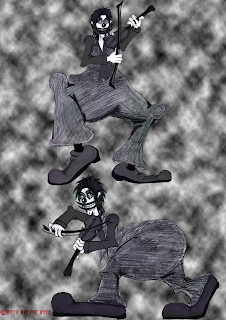 Whilst experimenting I accidentally coloured one of the images Black & White and discovered actually they colour wise they both work. Depending on where I go next with this Project I'll need to make a tough decision which Colour Scheme to go for.
Animation style wise the Project originally began in traditional hand drawn, however, as much as I LOVE this technique and undeniably will always be my first love no matter what, after much consideration I've decided try out a different medium and will now make this into a stop-motion film. That's not to say traditional hand drawn will be completely be off the radar though for experiment wise I do plan on using a variety of mixed medias BUT in the mean time stop-motion will be my main priority.
Style wise I plan for it to be a very surreal, weird, dark but fun Film people will sit back on and enjoy. I'm even considering going down a Musical route with this. It'll probably end up being a mixture of "The Nightmare Before Christmas", "The Phantom Of The Opera", and old style cartoons such as the Music Video of "Ghost Of Stephen Foster" by the Squirrel Nut Zippers.
As well as Projects I will be keeping regular updates of how "GANTO Renaissance" doing but just so you know that unlike the Squirrel this Project will be taking a lot longer to be complete. First of all I need to gather a team to help me make this. Secondly this Project will not be cheap therefore I'll need to work extra hard to save up. Thirdly and truth be told I really don't know what's going to happen to me or how my Schedule will be like in future. Depending on all three I'm hoping to go into Full Production next Year either Spring earliest OR Summer latest and that is best case scenario. The worst case will be that it may take even longer but either way I refuse to give up! I know how risky this Revival Project but it is a risk I am prepared to take. This will either make or break me but I'll never know the answer unless I take it. We only live once so might as well do something we REALLY want to achieve rather then sit on our bums moaning how hard and rubbish life is wondering: "Why didn't I do this? Why didn't I do that?"
That's all for now folks and until next time...
See ya later Navigators! :D And wish me luck! :)
Noor "Red Eye" Mula
Posted by Noor Red Eye Mula at 10:04