Hey Peeps! It is I once again bringing you a new Bloggy Update...But only this time on a slightly sadder note (as you can obviously see from my latest Title). :( 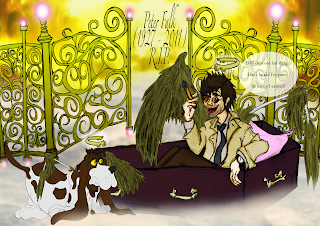 Unless you've been living under a rock for the last couple of days many of you should've by now have heard about the sad news of Peter Falk's Passing. Being an Actor Peter Falk has appeared in many Films/Television Series but the one Character many of us know and love him for is the cigar smoking, trench coat wearing, clumsy but loveable one eyed Detective with a crappy Police Dog and messy Car named Lieutenant Columbo.
When I was kid there were many TV shows my Parents watched which I used to yell from the top of my Lungs "BORING!!!!!" before sodding off to play with my Toy Dinosaurs but "Columbo" on the other hand was an exception; it was the only show I along with my Siblings used to actually sit down with my Parents to watch! O_o Of course the older I became, the more I appreciated "Columbo" and still do to this day. Hell I'll even go as far as to say it is without a doubt (in my opinion) the best Detective Series of all time. Unlike the other Detective Series which frankly I find too repetitive with their "Whodunnit" cliches and the murderer ALWAYS turning out to be the "most nicey, wicey person in the World who wouldn't dare hurt a fly" least suspected person (yeah didn't see that coming), "Columbo" on the other hand; was (and still is) a lot more original, witty and well written series with a really likeable main character carrying the show throughout. We know who the killers are but because they're so clever with how they killed their victims it was the question of how does Columbo figure it out? Of course once he says his famous Catchphrase "Just one last thing..." we know he's figured it out. ;) It's one of the few Shows I can watch it over again and never get bored of it.
Now onto the Actor Peter Falk...When I heard the news about his death I decided to read up more about his life and I have to say I was quite fascinated with what I read. He declared himself an Actor at age 29 and decided to pursue his dream. Despite Hollywood being a jerk to him at first, he refused to give up and oh behold look who had the last laugh! :D If anything this has just made me respect him even more. Peter Falk is/was living proof of no matter how old you are or how you look like, as long as you work really hard, carry on pursuing your dream and refuse to give up it WILL pay off.
So to bring this Blog to a close, Peter Falk...I salute you! R.I.P. fantastic Actor, you truly have indeed earned it and forever shall both you and Lieutenant Columbo live on in our hearts and memories for all eternity. Hope you like my above Illustration Tribute. :)
OH! And just one last thing...We all know you're secretly an Angel really! ;)


Well that's all for now folks and until next time...