It's Doodle Time: Create your very own Mythical Greek Beasts! ;)

Hey Peeps! It is I once again bringing you more newly created Illustrations/Doodles from moi's Artistic mind. :D

Now I'm pretty sure the majority of you should by now have heard of Greek Myths and those of you who haven't...SHAME ON YOU!!!!! >:( Nah just kidding! :D Googles' your friend so just look them up. :)

Anyways, everytime I think about Greek Myths I always think about their Beasts first, why you ask? Because they always looked so weird and might I add grotesque looking even. O_o Whenever you read the Myths explaining their so called "monster of the week" they always seem to either (or all) have a billion eyes, thousands of heads which are usually Dog heads or women's (that is so sexist), hundreds of multi-limbed torsos made up of humans, elephants, snakes, lizards, lions etc. (and Dogs), millions of mouths and Tentacles so they could eat you (afterall, Mr. Beasty won't be "scary" enough unless it eats you), 50 arms and legs and an arse usually belonging to...Yup you've guessed it, a Dog! (God they were so obsessed with Doggy body parts weren't they?)

OK the above I've just described is an exaggeration but that is pretty much what their Beasts look like. You've got to hand to the Ancient Greeks, they truly did allow their imaginations to go wild. Thinking about it I decided to play a little Doodle Game with myself that I used to play in Uni with my Classmates and create my very own silly looking Greek Beast. First I did this: 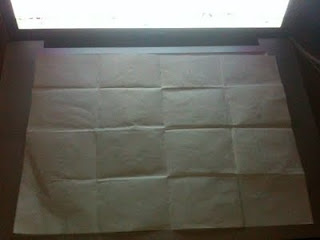 Next I kept folding the paper up (without looking) and just Doodled the first image which came to my head. I kept repeating this same technique with each box until they all filled up with a random different image. Then I unfolded this paper, filled in the small finishing touches to connect all the images together as one and... 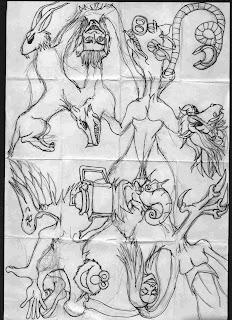 VIOLA!!!!! Here's ze result! My very own messed up looking Greek Beast! :D I have to say it's truly fascinating what you could come up with when you just stop thinking, stop being a perfectionist and just go with the flow. :) You know what another great advantage to this is? You could turn this image around multiple times and your Greek Beast could just look like another Beast. Observe... 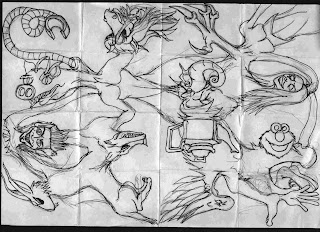 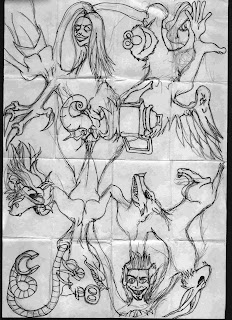 As you can see there is NO right or wrong way to hold this image up. Whenever you hold it up to show someone, you now won't have to worry about whether the Beast is being held upside down because...It...Simply...ISN'T!!!!! ;D 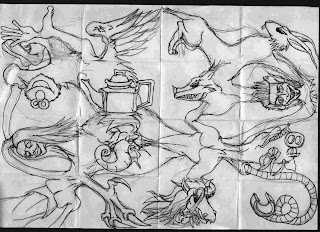 Pretty cool huh? Why don't you guys try this out yourselves and see what you come up with? Hell even play it with your friends if you feel like, it's great, great, GREAT fun! :D
And there you have it, moi's very own Mythical Greek Beast and I shall call it the ZOETINEARAJADJORG!!!!! Or just Zoe for short.
Well that's all for now folks and until next time...
See ya later Navigators! :D
Noor "Red Eye" Mula