Hey Peeps! It is I once again bringing you...Well actually this isn't really going to be a long Post to be honest, just going to give you all a couple of sneak peaks of Salvador's House Party and just a really small Update regarding BAA. Why? Because I'm nice like that. :)

I have to say the more I work on Salvador's House Party, the more I'm seriously considering including them into my Comic idea, personally I think they'd fit in quite nicely actually. :) 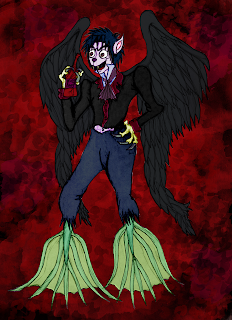 First up is the drunken Vampire Cat from moi's dreams (with the added fish tails for feet). I also took the liberty of experimenting with a blood stained type background. 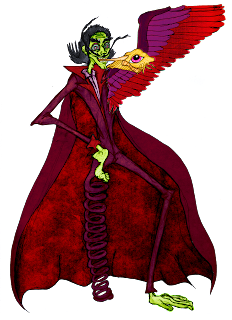 It's Salvador! Who unintentionally ended up looking like a Vampire colour wise. :/ Please believe me when I say that this was NOT intentional I swear! But saying that methinks he looks quite good this way. :) 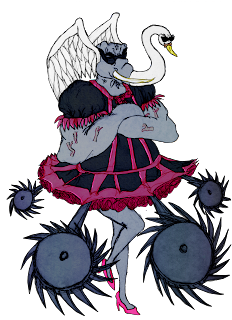 And here's the cross-dressing Bodyguard with extremely dangerous saws for knickers (eeeeep)! Don't mess with this Elephanty/Swany guy eh?
Now onto the BAA Comp. Truthfully I've been quite busy recently, in fact I've only just finished being a  Runner at The Mill recently so haven't really done as much as I'd like for Al Pasheepo & Gang. :( Neverless I REFUSE give up! I will make it dammit! Even if I miss the bloody Deadline, at least I'd have tried. Hopefully my next Update will be about BAA again so fingers crossed Peeps and watch this space...
Well that's all for now folks and until next time...
See ya later Navigators! :D
Noor "Red Eye" Mula
Posted by Noor Red Eye Mula at 08:59