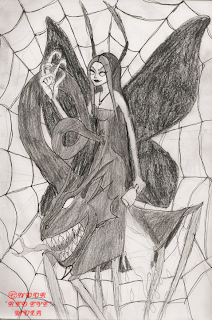 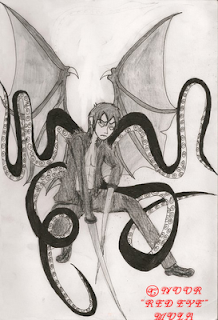 Just a quick Update!
These pieces of Illustrations which my lovely dear friends would/should know aren't new, they were completed Months ago BUT since I haven't Posted these on the Blog yet I might as well do that now.
The Image of the Female is a Man Eater known as "Lust", one of the 7 Deadly Sins which I hopefully plan to use as possible future Villians. They'll be more Sins Illustrations coming soon BTW so do keep your eyes peeled.
The Image of the Male is a Mutant, Demonic Vampire. I drew him due to my frustation at how Vampires (my favorite Legendary Monster) have now become crappy and sissified nowadays. (Stephanie Meyers how could you?!) And as you can tell I went a little extreme but hey he looks a hell lot better then any of the new Vampire Characters right now. He too is a Character I'm considering using as a future Villian for my Story. I also plan to do a bit of a Test Animation of him hopefully pretty soon (if I'm not too busy) so once again do keep your eyes peeled.
That's it for now until next time...
See ya later Navigators! :D
Noor "Red Eye" Mula
Posted by Noor Red Eye Mula at 20:46