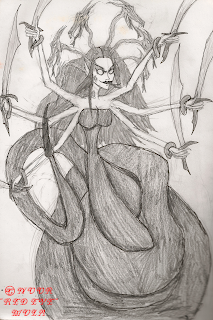 Hey! It's annoying me again! :D

Well folks she's finally here it's the next Sin ENVY! And my God was she bloody hard! O_o But hey she turned out well so it was ALL worth it in the end! :D
Now believe it or not I orginally envisioned Envy to be Male but then I realized that Lust was the only Female I had in the group so I had to create another.
This BIATCH basically hates other Woman and kills them (no prize guessing why) so if you're a Beauty Queen...YOU'RE SCREWED!!!!! :p And I don't know but I've always envisoned Envy to be a Reptialian type Creature so as you can tell I've taken aspects from other popular Mythical Reptile type Creatures and VOILA! Here's Ze Result! :D
More Deadly Sins coming soon but until then see ya later Navigators! :D
Noor "Red Eye" Mula
Posted by Noor Red Eye Mula at 20:22