AND FINALLY THE DEADLIEST SIN OF ALL...PRIDE! 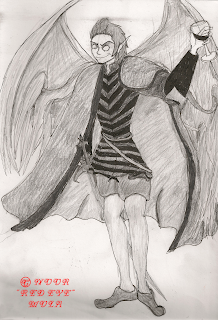 Hey people it's me again! Introducing the final and the most deadliest Sin Pride! :D
Now those who've done their Research will know that Pride is the most dangerous due to the fact that it's the main catalyst cause for the 6 other Sins for without the elements of Pride none of them would exist at all. Of course I would eleborate more but since these are MY Interpretations of The 7 Deadly Sins then I highly suggest you guys go off to do your own Research on this Subject. :p Now here's my Interpreted version of Pride...
Pride is a well dressed, suarve, classy, intelligent, vain and beautifully handsome (come on I'm Woman! Surely I'm entitled to create at least ONE eye candy just for us ladies eh and who better than Pride?! Yes I'm a Female Perve O_o) Demon with a very, VERY nasty and arrogant Evil streak. Since he's the most normal looking of all the Sins as well as a very charming, confident fellow even the world's most biggest cynics end up trusting him completely unaware of his true Evil intentions and by the time they find out it's too late! O_o
Despite being stronger than Wrath (yes STRONGER than Wrath) he solves his plans using his manipulating intelligence and only ever truely uses his strength as a last resort.
He's the Leader of the 6 other Sins who all greatly admire and follow him devotedly. In fact he is the only person they all respect greatly but unfornately he doesn't feel the same way about them and takes great pleasure with treating them all like dirt off his shoe for as far as his arrogant self is concerned he is purely "Superior" of all living things so therefore all must be treated with great contempt! O_o
He has the power to transform into a huge gigantic grotesque looking Monster which takes the strongest elements from all the other 6 Sins but again this is extremely rare which he'll only use as a last resort.
Being Immortal he cannot be killed BUT he can still be defeated for his biggest weakness is his arrogance (despite thinking he doesn't have any at all ooooooo what a surprise) and as the saying goes...Arrogance will be your downfall! :p
And that's the end of The 7 Deadly Sins (it's over already? Ooooooh I feel sad now) but don't worry Peeps I've still got so much Artistic Works to create and show so stay tuned and until next...
See ya later Navigators! :D
Noor "Red Eye" Mula
Posted by Noor Red Eye Mula at 16:26