Hey peeps! It is I De Lady Of Darkness with a couple of Updates. :)


First of all sorry for not Updating just been a bit busy with some Paper work so to make up for it here are a couple of Illustrational works I've done/completed previously some time ago (one I'm still currently trying to finish). 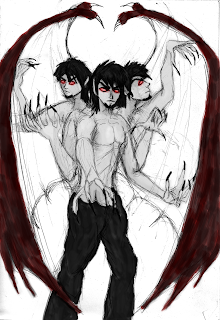 Speaking of which here on the left is the very Image I'm currently still trying to finish of a Multi Limbed Demon Dude! :D Here I'm trying to teach myself how to Paint with Photoshop.
It's a lot easier than I expected it to be but obviously I've still got a very, VERY long way to go so wish moi luck! :) 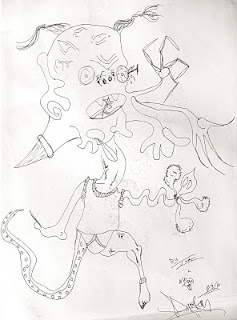 On the right is a Doodle of some...Weird...FUgly...Y-Pants Wearing...Smelly...Thingy! I don't know what the HELL it is! O_o
I should also point out that this Image wasn't entirely made by me, half of this was also Illustrated by my good Friend Joshua Kahan who himself is also a fellow Animator/Illustrator. In fact I actually used his personal Style for this instead of my usual own. A Link to his Blog is on the left of my Blog Page under "Links" if you'd like to check out more of his awesomeness (and please do drop by my other Friends Kristin Wright's and Tope Olayinka's Blogs to check out their awesomeness too you won't regret it)! :) 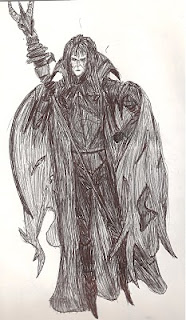 A bit of a Fan Art here on the Left of everyone's favorite Goblin King Jareth from the Cult Classic Film "Labyrinth"! Here I drew him entirely with a Writer Pen! O_o
I'm also considering doing another and even better Illustration of him so do keep your eyes peeled! :)
OH! just for good measure since I LOVE "Labyrinth" so much here's a small treat! 8D 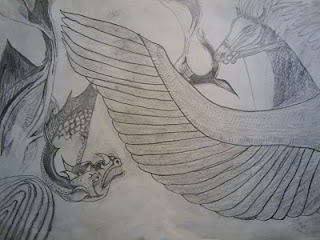 And finally on the right is an Illustration I've attempted of old Style Japanese Art. It's a bit all over a place but hey I think it's worked out quite well actually. :)


Secondly I'm going to be doing a Tribute Illustration to the late, great Frank Frazzetta where I'll be doing an Epic type Illustration done in a similar Style as him BUT knowing the way I work the Illustration itself will more than likely be less serious than Frank Frazzetta's way but hey what's the point of taking inspiration if you're not even going to make it your own. ;) So do look out for it. :)

Thirdly sorry I haven't Uploaded any Animation Work it's just the truth is the majority isn't even finished! O_o As the good old Cleaner form "Toy Story 2" perfectly puts it: "You can't rush Art!" So the Animation I'll more likely Upload for the Time being will be Animation Tests. :)
That's all for now Ladies and Gents and until next time...See ya later Navigators! :D
Noor "Red Eye" Mula