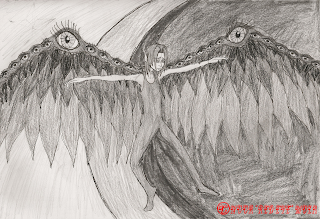 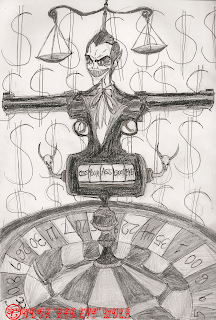 Greed (botton Pic obviously) is so overly obsessed with Money he'd do whatever it takes to make damn sure every, single Penny is his thus the nutter has turned himself into a Russian Roullette killing Machine! O_o Never, EVER Gamble with Greed for no matter how good you are or how many lucks you have or hell even cheat you'll always automatically lose! He has Gun arms for crying out loud and he isn't afraid to use them! In fact if you dare even think you have a chance then frankly my dears you deserve die! As the saying goes...Live by the Sword die by the Sword! (Or Guns and Money in Greed's case! :p)
Now Sloth (top Pic obviosly) is a completely different Story for unlike the other Sins he isn't even that Deadly in fact he's just a sadly tragic individual. Sloth used to be a well loved and respected Dancer who fell in love with a woman with the most Beautiful Eyes who in return loved him back as she always loved watching him Dance. Wanting to be with her forever he one day made a deal with Pride to grant him an Immortal Life which Pride agreed with. Now an Immortal Dancer he couldn't wait to bring his true love to Pride to grant her the same gift but unbeknowst to him Pride had another Agenda, he was missing a Sin and wanted him! Thus Pride killed the woman with the Beautiful Eyes leaving the Immortal Dancer devestated. Begging Pride to turn him Mortal again so he can be with her Pride points out that once Immortal that's it! So instead Pride makes him another Deal. Since his lover loved seeing him dance he'll have him eternally dancing with her Beautiful Eyes watching him on within his Immortal Wings and whilst doing this the Immortal Dancer shall also sleep eternally so that he'll be able to Dream of being with her forever. Seeing no other alternative the Immortal Dancer agrees and thus the tragic Sin of Sloth is born eternally dancing and sleeping dreaming of his one true love with the Beautiful Eyes as well as her watching him Dance. Sloth's Hypnotic Dance traps those who sees him into eternal sleeps dreaming on as their Eyes soon join those of his lover watching him Dance for her.
WHEW! That is the most depressing Story I have ever told! O_o
Tune in next time when I introduce the Final Sin Pride but until then...
See ya later Navigators! :D
Noor "Red Eye" Mula
Posted by Noor Red Eye Mula at 18:57