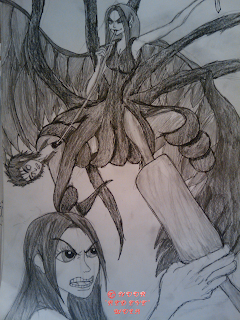 Hey peeps it's me again with another Illustration to show. :)

Sorry for the roughness it's just that my Laptop, Computer and Scanner are all STUPID so I've put it as a Photo for now.

The man wanting a bit of "LURVE" ends up getting captured by a Tentacled Harpie (who's now sucking his Heart with a Straw) and his Wife is pissed off that she has to save him AGAIN! That's right he's a dirty man ho! Why doesn't she just leave him I don't know.

This was one idea for Frank Frazetta Competiton but I got a bit carried away and now it's become too Cartoony to enter it. :/ No worries I've got another idea so I'll work on the next one and be more careful this time. :)

Don't get me wrong I like it but I just think it could've been better. Espcially the Wings and Tentacles I've Drawn them much better before. I also think the Wife looks a bit out of place.I really need to learn how to not to Draw in such a big scale.

That's it for now until next time...See ya later Navigators! :)