The Frank Frazetta Tribute Competition Image (Or What Could've Been), Squirrel Update And Possible Future Story

Hey Peeps!﻿ :D It is I once again bringing you the latest additions to my Magical Blog in Ze World Nutty moi! ;) 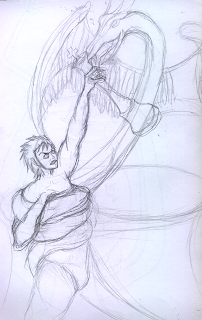 Remember Months back when I was trying to enter The Frank Frazetta Tribute Competiton? Whatever happened to it you ask? Well this was my intended entry which as you can see has never been completed.
What I had planned in my mind was to give a somewhat a much more humourus take on Frank Frazetta's Style but still have an Epic feeling from within. Of course as you all may know it was originally The Tentacled Harpie Image but I overdid it and it ended up being quite Cartoony instead which I really wasn't that comfortable with. Don't get me wrong the Image was nice in itself but you could hardly call Frank Frazetta's Style "Cartoony" now can you? So of course I decided to start again and oh behold that's where the above image comes in.

So what happened? Well first of all I kept trying to improve the Winged Serpent because I didn't really like the way he looked (still don't to be honest :/) and secondly I got a bit cocky and thought "Oh I've got plenty of time! Oh I could do this tomorrow!" But as the Deadline got closer I got ill O_o and didn't have the energy so of course I missed the Deadline. :( 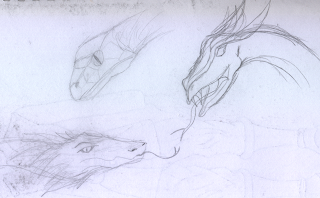 Just roughs of trying to get the Winged Serpent right.
I admit it was my fault, moral of the Story kids? Never, EVER leave anything til the last minute mmkay? ;p
I will try and finish this Image once and for all evantually but for now Lucius The Squirrel of course takes my full pirority.
Speaking of which here are the latest developments of Lucius now. I've actually got more images but unfortunately my Blog Upload is being a little bit of a Biatch at the mo so these are the only 3 Images I could Upload at the mo. Better than nothing eh? :/ 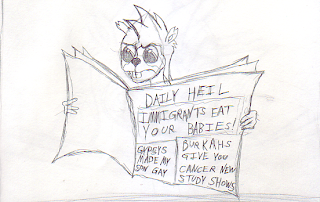 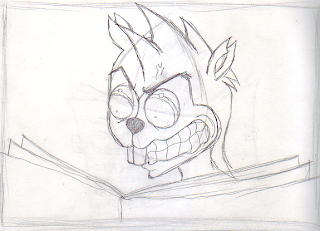 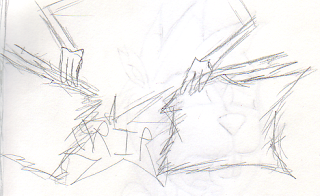 I'll try again later tonight to Re-Edit this latest Post but can't promise I'm afraid.
And to bring this latest Update to a close below is an image of my possible future Story "Severus And The Children Of Benjero Callum". 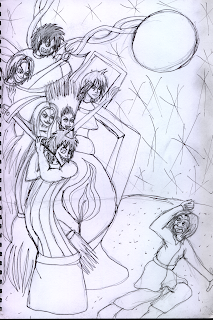 Not my best Illustration ever I admit, plenty of flaws here but it's just a rough so I can live with that.
Apart from the "GANTO Revival" Project this is a quite an ambitious Project﻿ to be honest. Ideally I'd LOVE for it to be a Feature Film but I've got to be realistic here right now it's just me. Don't get me wrong I do intend on Teaming up with my Friends from UNI again and working with them in future but bare in mind that we're ALL going to be very, VERY busy Bunnies so at the mo I'm considering making this into a one off Mini-Comic/Manga Series instaed for now. :)
Well that's all for now folks and until next time...
See ya later Navigators! :D
Noor "Red Eye" Mula
Posted by Noor Red Eye Mula at 11:39